Interview with Sebastian Anjou – Director of Business Development at Vuzix-Corporation 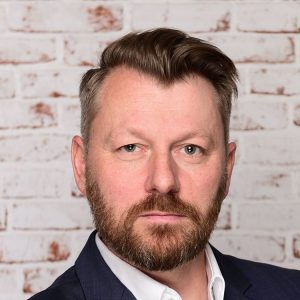 Sebastian Anjou – Director of Business Development EMEA at Vuzix-Corporation- is a very positive person who enjoys meeting new people. Interviewers Nancy Verspuij and Kim Zwijgers from the department of communication at Hogeschool Rotterdam in the Netherlands, were very excited to get a glimpse of the (work) life of a busy businessman.

Moving away
Born in Sweden with a hate for attending school (Gymnasium VWO), the question: which note did you have? didn’t appeal to him at all. He loved being outside, having a break and talking to people. Early on it was clear that he had a preference for being social. Together with his family who had a brewery and sold alcohol -which at the time wasn’t the right thing to sell- he moved to Germany. Eventually finishing his school there and starting his study in economics at the university in Berlin.

Finding a future in work life
20 years ago, he started his first job of many at Dodge Telecom as an IT project manager but questioned if this was something that fit his kind of education and degree. Eventually jumping to IT Europe and getting an administration job at McDonalds. Still, he missed being more social in the work he did and decided to try Decor Nick, but it was very complicated in terms of certification for the area. He always kept the idea of technology overrunning him in his mind, so he needed to change himself. That’s the moment he got introduced with augmented reality. The next job he got at a hardware company wasn’t a success, because the company wanted to sell their software and unfortunately didn’t succeed. Then someone called him and offered to join a startup which designed and manufactured specific technology ways to display projectors in augmented reality glasses. After a long journey of finding a suitable job where he could see future in, Vuzix was eventually his way back on track.

Vuzix is a pioneer in augmented reality, they had a different approach than other AR companies. Instead of binoculars they made a monocular, which is enough for people to take the big step from using a smartphone to going handsfree in a small manner. The reason Sebastian joined Vuzix is because they were doing their own waveguide, which is very rare to be able to do. They can design, build and produce their own waveguides. According to Sebastian; this is the future, this is the jewel you will need to have in the augmented hardware branche to make a long lasting business.

Business is like a hotel
Sebastian stated: “When I do business, I sometimes see parallels with a hotel. You have a receptionist and a service mentality. Everything that you do in hotels is something that you do with business. And these people, who want to make business with you on a long term, you need to set up a friendly environment with. Also, do not go into specifics topics, for example: no religion and no politics. That’s the number one rule!”

According to him: before you start, you must make some compromises to get into that level of business and success you want to achieve. The competition may generate different options. In the end you grew up in a certain standard you are used to live and don’t want to go under the given standard. Plan ahead! When you are graduated you can look for a job or if someone is asking you to join his or her team, never say no! Use this opportunity. They are more experienced; they may understand you better than you can understand your own skills at that moment.

Communication is the heartbeat of making business successful. If it’s not working communication wise, how could it work at all? That’s why communication is so important in a company. It is something that people underestimate when you talk to businessmen or businesswoman.

When the topic of family came up, we were very touched and wanted to highlight some of Sebastians words:
“I want to have more say with my daughter when it comes to choosing a job compared to my own father’s efforts. My father, in his best position, had to be a brewer. It was given since his birth, but the biggest gift my father could give me was the freedom of choice. This doesn’t automatically say that when you have the choice, you need to know why you’re doing it, but my father wasn’t investing into that at the time. Ask yourself ‘what do I want to study? What’s my goal at the end?
And what is my target that will push me through it?’ This is necessary for making your final plan.

Want to stay up-to-date about Gemvision?